As fruit trees mature, they must undergo two pruning phases. When the tree is young, the first phase consists of cuts to select the primary scaffold and heading and thinning cuts to create the secondary scaffold. In trees over 5 years old, the second phase begins, in which fruiting wood is maintained and renewed by thinning and heading fruiting and non-fruiting wood. Thinning cuts refer to the complete removal of branches and are applied to promote space for aeration, light penetration and fruit maturation. Heading cuts refer to the removal of portions of branches and are applied to force and direct branching and spur development and to restrict overall size of the tree.

In both phases, general pruning principles apply. First, remove all dead, dying and diseased wood. Second, remove all branches and limbs that grow toward the center of the tree. This promotes aeration and light penetration to the fruiting wood. Third, thin branches and limbs that cross or touch so that abrasions do not develop. Finally, remove any suckers growing off the rootstock above or below the ground.

You will find that heavy pruning encourages the formation of water sprouts and vegetative growth at the expense of fruiting woods. Light pruning, on the other hand, encourages heavy fruit set which results in smaller fruit of poorer quality and possible broken branches. Since home growers must also keep trees to manageable sizes, strive for a balance between heavy pruning and renewing fruiting wood. In order to achieve this, you should know where your tree bears its fruit.

Almonds produce on spurs that remain productive for up to 5 years. Remove water sprouts and head and thin as necessary. As the tree matures, remove older, unproductive spurs to generate new spur growth.

Apples produce fruiting spurs on wood 2 years and older that are productive for 6 to 10 years. Thin out branches to admit sufficient light to all parts of the tree; this will encourage new spurs to develop. Remove older, unproductive spurs as the tree matures. You may also need to thin spurs. Up to two-thirds new growth can be cut back annually.

Apricots bear the bulk of their fruit on 2 year old wood. Because of a current influx of the bacteria Eutypa, we recommend pruning apricots in July and August, ideally, or by late September. All new growth can be cut back approximately by two-thirds. This wood will grow fruit spurs the second year and produce fruit the third year.

Cherries are borne on long-lived spurs that are productive for 10 to 12 years. When trees are young, head back main limbs one-third to create branching. Continue heading to create more branching and thus, more spurs. Because spurs are long-lived, thinning cuts tend to dominate pruning in phase two.

Figs produce fruit on 1 year old wood and the upcoming season’s growth. They require little specialized pruning; head back to keep tree to manageable size and thin to keep aerated.

Peaches and Nectarines produce fruit on last year’s growth. Remove about 50 percent of current season’s growth annually. On younger trees prune whips back to 12 to 24 inches. Use thinning cuts to promote aeration.

Pears bear fruit on spurs on 3 to 10 year old wood. Main limbs are usually headed each year and side limbs are lightly headed or left unheaded, producing spurs and fruit in future years. As in apples, remove older, unproductive spurs and thin middle-aged spurs. Up to two-thirds new growth can be cut back annually.

Persimmons bear on the current season’s shoots. Pruning consists of thinning shoots to promote growth for next season’s crop and heading cuts to keep fruit within reach.

Japanese Plums and Italian Plums (Prunes) bear on fruit spurs which live 5 to 8 years. For varieties that bear heavy crops, remove one-half of the shoots each year. Other varieties, like Santa Rosa, bear moderate to light crops so remove only one-quarter of the shoots.

Walnuts produce fruit on spurs on 5 year old wood that remains productive for up to 15 years. For the mature tree, a pruning program can consist of applying the general pruning principles described above.

Summer Pruning assists home orchardist with the goal of keeping trees to manageable sizes. Typically, the whip emerging from dormant season heading cuts are themselves headed and thinned in August or after fruit harvest. By removing this growth, you remove leaves which would otherwise generate food for the tree and thus, vegetative growth. Since most rootstocks, even those labeled ‘semi-dwarf,’ are primarily developed for soil and climate adaptation, pest and disease resistance and early bearing, controlling the size of the tree becomes the home orchardist’s responsibility. Many trees, especially apple, pear, apricot, peach, nectarine, persimmon, fig, and plum trees, can be kept to 10 to 12 feet utilizing summer pruning. Trees this size are more easily sprayed, pruned in winter. 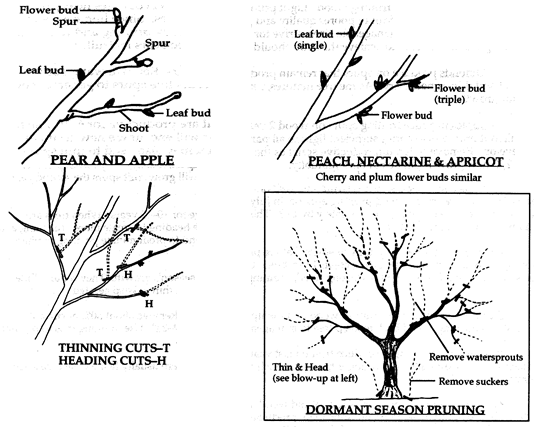 Provide your name and email address to receive promotions, news and garden advice.
Your address will be kept confidential!