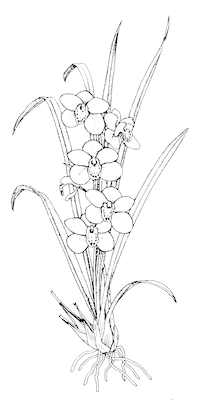 The flower on a Cymbidium looks like a miniature Cattleya except the colors are not quite as dramatic. However, the Cymbidium is almost ‘bullet-proof’ as far as its growth requirements and care are concerned.

Cymbidiums grow and bloom best in a favorable outdoor environment and are hardy to temperatures as low as 25°F. There can be from 8 to 18, four inch flowers on each “spike” in a one-gallon sized container. The “spikes” will be as tall as or a bit taller than the leaves in the pot.

Cymbidiums grow best in a mixture of 4 parts small fir bark (¾” – 1”), four parts orchid mix and one part perlite. You can fertilize monthly with special orchid fertilizers or sprinkle Osmocote Plus (14-14-14 plus micronutrients) in the pot once every four months. Water once every other week in the winter and probably once a week in warm weather. Water until it runs out the bottom of the pot.

Cymbidiums grow equally well in terra cotta, plastic or wooden containers. They will be happy there for up to three or four years when they should be put into a larger pot or divided.

Cymbidiums bloom best if they get at least 4 or 5 hours of direct sun each day (east facing on the porch is good. When plants get full sun all day that’s too much and the leaves turn yellow and then brown on the edges. If the foliage is a nice glossy dark green, the plant is not getting enough sunlight. The foliage should have a slightly yellowish tinge.

Cymbidiums may be either standards with leaves up to four feet long and generally bloom after Christmas or miniatures with leaves about two feet long and starts to bloom before Christmas. The flowers of miniatures are about three-quarters the size of the standards. Also, in order to bloom properly, Cymbidiums need a night time temperature of 55°F or lower during October or early November, hence raising them outdoors provides the perfect environment here in the Bay Area.

Cymbidiums don’t have many pests. If you notice ants running up and down the flower stem, look for aphids on the flowers. Wash them off with Safer Insect Killing Soap.

You can bring your Cymbidiums indoors as they come into bloom. The flowers will last longer if the plant stays outdoors but may be more enjoyable indoors. The flowers on the potted orchid will last six or more weeks. If you cut the flowers and bring them indoors, they will last about three weeks.

It is time to divide or repot the Orchid when the roots show through the bottom of the pot or when the plants are pushing up against the edge of the pot or starting to hang over the pot. Knock the plant out of the pot or if necessary, break the pot to release the Orchid. The root ball will consist of a mass of white roots. If any of the roots are black and spongy, the plant is being overwatered and these roots are rotting. Use a saw to cut the root ball in half, horizontally. Discard the lower half. Separate the top of the orchid into segments consisting of clusters of 3 to 5 green leaves attached to a “pseudo bulb”. You may have to brutally pull the plant apart or even saw it vertically into individual segments to separate it. If any “pseudo bulbs” have been cut, discard them. If a “pseudo bulb” has no leafy vegetation it’s called a “back bulb”.

These “back bulbs” can be discarded or replanted and be expected to sprout new leaves in 9 to 18 months. Cut off ½ to 2/3 of the roots on the remaining pseudo bulbs; those with their green leaves. Using the potting mix previously described, plant enough of the orchid pseudo bulbs and leaves to fill ¾ of the pot. The potting mix can cover the pseudo bulbs and extend an inch up the green leaves. Use your dowel to firm the mix around the roots and add more mix if needed. Cover the last inch or two of the pot with pure fir bark for best appearance. Water well and half an hour later, water again to be sure the fir bark is moist.

Start your fertilizer schedule a month or two later. If you decided to keep the barren back bulbs, plant 3 to 5 in a one-gallon can with the orchid potting mix, place in filtered sun and water when the top 2 inches is dry. Then be patient.

So, if you want to grow an orchid, a Cymbidium should be your first choice to guarantee success!

Provide your name and email address to receive promotions, news and garden advice.
Your address will be kept confidential!